The  medieval world of monks and abbeys brings to mind an ascetic life of isolation, prayer and scholarly study. This tells only part of the story. Irish monasteries were often thriving and highly sought out enclaves of cultural creativity, quite literally beacons in the dark, responsible for preserving and passing on precious texts and for the creation of some of the world’s most imaginative and fanciful Christian art.

Bective Abbey was founded in 1147 by Murchadh O’ Melaghin, King of Meath, for the Cistercians, and was dedicated to the Blessed Virgin. It was an abbey of some importance as the Abbot was a spiritual lord and sat in the Parliament of the Pale. Hugh De Lacy, was buried there in 1195, but was eventually moved to Dublin. The abbey was suppressed in 1536 and the lands were rented to Thomas Asgarde, and eventually bought by Andrew Wyse in 1552. It passed into the hands of the Dillons and then the Boltons, before falling into ruin. The chief features of the ruins are the combination of both Church and Defence. The Cloister is the best preserved of the buildings and there is a pillar of a figure carrying a crozier. There are also some beautiful arches which are still intact.

Bective Abbey, the substantial remains of Ireland’s second Cistercian monastery, founded in 1147 and only 10 mins drive from my front door. My first image was taken over 10 years ago now and I have being back at least 4 times during each following year right up to the present day. Why ? I bring my students here from the Adult Education night course for their field trip to put into practise things learned during the course as you can see in the image below.

My first image taken at Bective Abbey is special one as it was the start of the process in my head of seeing the final image framed and on the wall. It took awhile for this to happen naturally but now I’m stuck with it. Also this image is no longer possible as they have put up a wooden fence to separate the land around the Abbey from the local farm land. So no more worries about all the cow pats you would have walked in or put your camera bag down on. The second thing is the dead tree you see in the foreground is missing all the branches pointing to the Abbey as you can see in the image below.

It’s hard not to get a good image of the Abbey if the weather is right for you. However, what if it’s not what you wanted and that full Bective Abbey image is not possible like two images above. Move indoors so to speak. Inside the Abbey has even more potential to capture images of specific aspects and to me this is more interesting.

Well what do you see? If your into colour ( and some people are )  you have the green moss covered walls you can play we. The pillars are interesting as mentioned in the second paragraph. But what of interest to me in this photo ?

The image below is a wonderful example of what you can capture when you have nice soft defused light ie overcast cloudy normal Irish weather. Shapes, Lines and Tones are in bucket loads here. This is just one example as you can capture another spiral stair case on the other side of the Abbey. I play a  game with my workshop students and it’s called “The sticky Bun Image”. I’m after a particular image which brings together all the things they have learned about Composition during the previous 7 weeks of study. Unfortunately I can’t show you the image as that would spoil the game and the chance to win a stick bun  when we stop for lunch. So you will have to visit for yourself or even better sign up for one of my night courses. 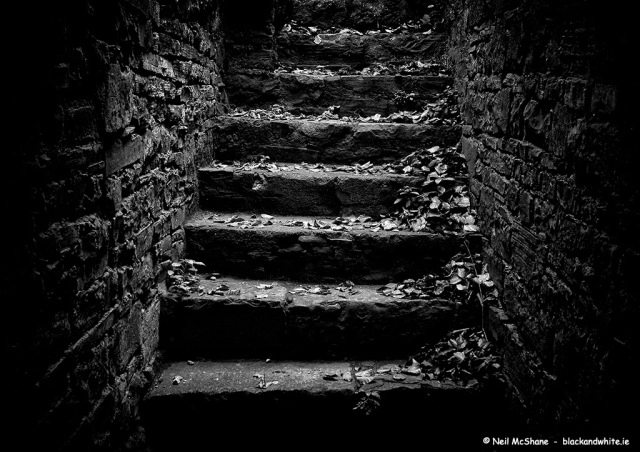 And finally, if the sun is shining and your are here at the right time of the year, the shadows from the  branches can make for an interesting composition with the Abbey holding the background interest. It’s getting harder and harder to get clean images Of Bective Abbey. “Clean Image” you say……… No tourists I mean. You might have to wait for all the happy snapper to get back on the tour bus and speed away to their next stop before you can press the shutter button. A case in point with this image below. 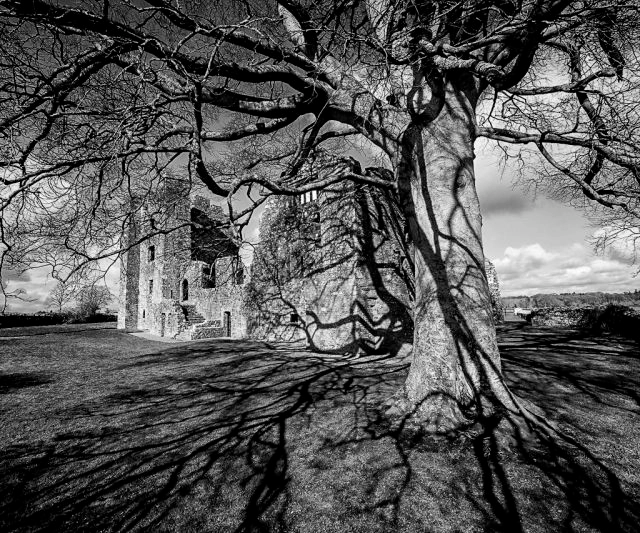 Hope you enjoyed this post about Bective Abbey and some  of the images I have captured over the many visits I have made to the Abbey. If your lucky you might even see me there when you visit.